It cost dearly to frighten a Chinaman!

You are here: Home1 / It cost dearly to frighten a Chinaman! 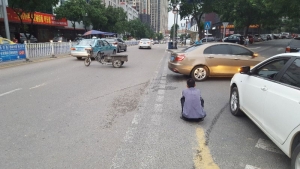 It cost dearly to frighten a Chinaman!

During one of his many visits to China, CEO Per Veile got a nasty fright – anyway it was Per, who ended up having to compensate a Chinaman for being frightened.

Per was out driving in his car and suddenly a 3-wheel vehicle (photo above) drove onto the road in the wrong direction.

A collision was inevitable, but fortunately there was only material damage.

When Per pulled over and got in touch with the Chinese man, it soon became necessary with an interpreter.

For that reason Per contacted his people at office, who immediately rushed to help.

The Chinese man – who had driven in the wrong direction and straight out in front of Per – wanted to be compensated because he was frightened by the incident.

Then the Traffic Police was contacted by phone and their message was clear: ‘Oh, it will be very difficult, if we first have to get out there. Because then we must seize the car for a few days and we cannot arrive until much later in the day. The easiest way is that you just pay him’.

Per and his employees followed the advice – though they did negotiate a compensation of 13 EUR which they believed was a more appropriate compensation. It was, after all, only a minor scare!

It still ended up costing 470 EUR because the insurance would not cover the damage to the company’s car, now that they had reached a settlement with the Chinese man.

Yes, even though Cp Sourcing has traveled in China for many years, one can still be surprised (and frightened) of amusing episodes.

You name it – We make it
Scroll to top