You are here: Home1 / Cycling team from the Danish local area to China with the support of Cp... 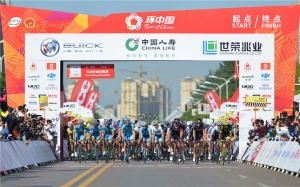 In 2015 Cp Sourcing – along with a number of other local companies – chose to enter into a sponsorship agreement by the establishment of a new locally based cycling team under the name Team ColoQuick.

Cp Sourcing chose to support the team through sponsorship, partly to support a local initiative. But with the sponsorship owner Per Veile hopes to market Cp Sourcing through new paths – and as a sponsor the team’s cycling routes brings Cp Sourcing far and wide.

The team had great success last year. Among other great events, one of the young talents on the team won a stage and the youth jersey during the Tour of Denmark.

Per Veile has eagerly followed the team’s performances closely and is excited that CULT has joined the team as title sponsor. Cp Sourcing is also co-sponsor in 2016, where the team will appear as Team ColoQuick-CULT.

Latest news from Cp Sourcing’s sponsor adventures in cycling is that the team has left Denmark this week for a three week stay in China, where they will participate in the Tour of China.

The Tour of China is not as widely known outside the cycling community, but the tour is China’s version of Tour de France. The riders will face a stern challenge, but no matter how they are doing in the race, it is a great opportunity for Cp Sourcing as a sponsor to get extra publicity.

With the company logo on the riders’ jerseys in the Tour of China, Cp Sourcing gets an opportunity for massive exposure. The organization behind Tour of China reports that there is extensive press coverage of the tour, which therefore reaches over 1 billion people.

That is crazy! We will just repeat that:

Cp Sourcing wants to witness the race first hand and has chosen to follow the last two stages.

Here is the hope of course to see all the riders from Team ColoQuick-CULT reach the goal, yet knowing that the race is extremely hard and is comparable to the Tour de France.

You name it – We make it