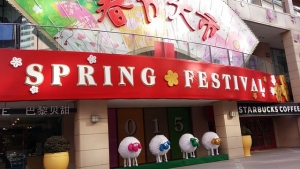 The Chinese New Year is also known as Lunar New Year or Spring Festival and is considered the most important of the traditional Chinese holidays.

The celebrations goes on for 15 days and it is a spectacular experience.

‘It is a major celebration in China and in many ways similar to Christmas. Families gather to eat good food and the children receive gifts of money in red envelopes, they are called ‘lucky money’. Of course there are also fireworks and plenty of red as the Chinese, according to an old legend, uses the color red and the noise from the fireworks explosions to scare the silent monster Nian away.’

‘The Chinese considers the New Year festival a big national holiday celebration, a bit similar to the massive celebrations of New Year in other parts of the world. including Denmark. The major difference is that the Chinese New Year is celebrated over 15 days. During that time most businesses are closed. For this reason we always make our customers aware that there are extra long delivery times associated with Chinese New Year.’

Be aware of changes in delivery times

In addition to the 15 public holidays during the celebration of New Year, many companies are significantly influenced by the festival for 10 days both before and after New Year. The reason is that many employees travels home in good time, as there is great pressure on the public transport system in China during this festival.

This means that over a period of 1 month, the Chinese companies are not operating on full power.

Per Veile advices all customers to contact him now, if you have a task that Cp Sourcing must solve before the holidays hit in early spring in conjunction with the Chinese New Year.

Yes please. Let’s have a non-binding talk about the possibilities